A WEST Kirby vet has been filmed for a children’s television programme which follows a little Moreton schoolgirl and her cat called Frank.

Veterinary surgeon Dylan Payne of Acorn Veterinary Centre in Acacia Grove made sure Grace Wharton’s beloved cat Frank had a thorough check up on camera for CBeebies Ferne and Rory’s Vet Tales.

The 25-episode show, in its second series, is a spin-off from the popular My Pet and Me featuring the same presenters. Each episode follows a different child taking their poorly pet to a vet for help with making them feel better and aims to teach children about veterinary practice and animal care. 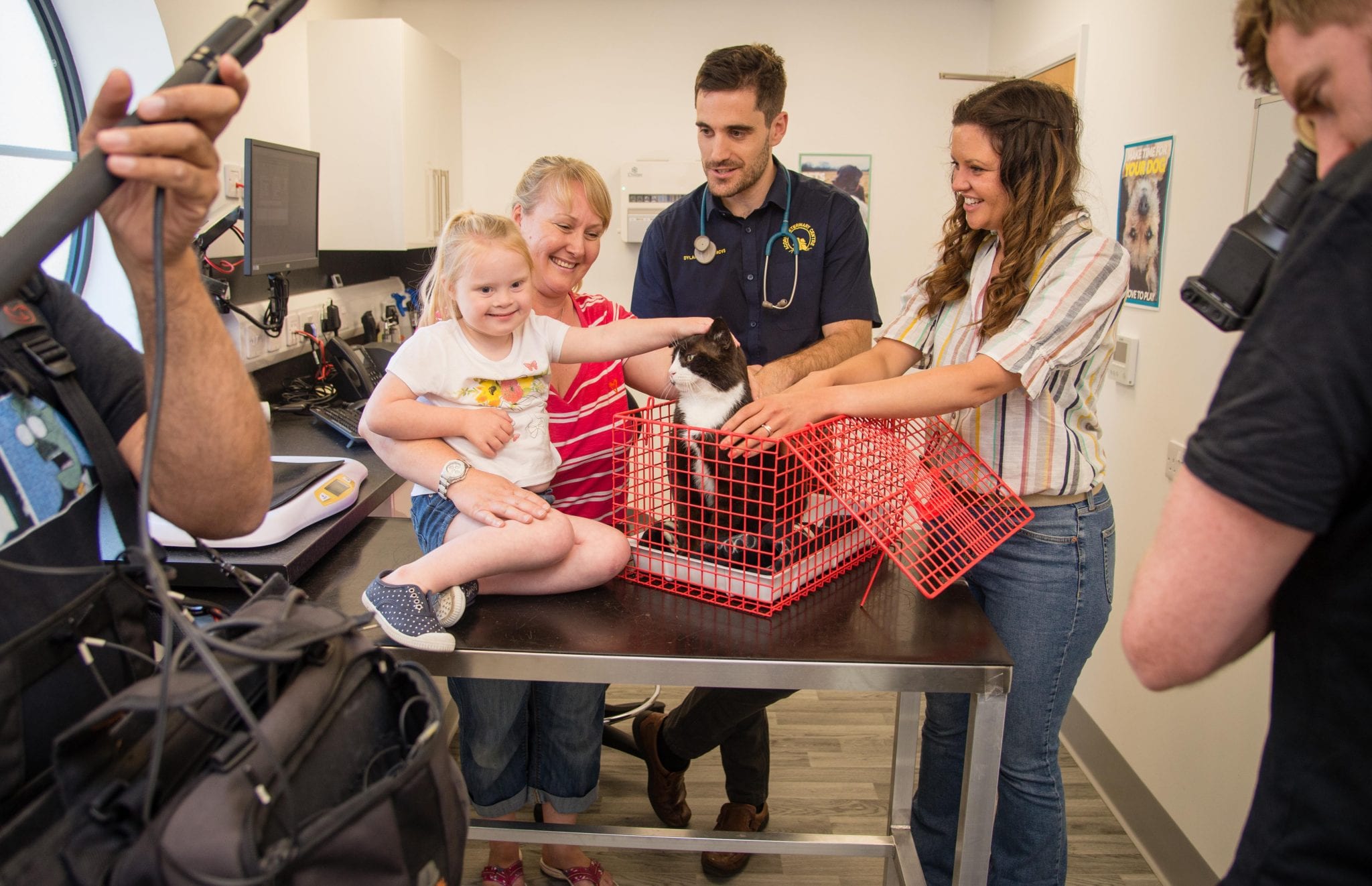 The film crew enlisted the help of Dylan at Acorn Veterinary Centre, part of Willows Veterinary Group, to give seven-year-old Grace’s pet a thorough check over after he was diagnosed with a liver problem – cholangiohepatitis – earlier in the year.

The condition causes inflammation of the liver and bile ducts and is a common cause of feline liver disease.

Dylan has been a vet for five years and joined the Acorn team around five months ago.

The surgery is part of Willows Veterinary Group which offers a wealth of knowledge and expertise through a network of 25 small animal practices, a referral veterinary hospital, two equine centres and a seven-office farm practice, located across Cheshire and into Greater Manchester, North Wales, the Wirral and Staffordshire. Willows is accredited by The Royal College of Veterinary Surgeons.

It was Dylan’s first time in front of the camera and he said: “It’s been a great opportunity and it has been very interesting seeing how much goes in to the making of one episode of a series such as this.

“I like the idea of the series too because it shows children what goes on behind the scenes at a veterinary surgery such as ours. So much takes place in the back room, away from the consulting room, when we are helping people look after their pets and so I think this is a good way to share this with children.

“Frank is a very friendly cat. He’s had quite a heavy recovery period from his liver problem and today it was great to see he is recovering well.

“I was filmed giving Frank a scan to check his liver and also we did a blood test to look for any changes there which help us to monitor how well the liver is functioning.

“He was bright and alert and I am pleased to report we were able to give him a clean bill of health.”

Ferne Corrigan, one half of the BBC presenting duo who front the series, was there to meet vet Dylan, Grace, and Frank.

Ferne, who has two rescue guinea pigs, said: “The surgery is absolutely brilliant and everyone had been so welcoming. We’ve had a great day filming here with Grace and Frank. It’s been lovely to tell their story.

“The practice is so modern, light and airy. The waiting room is huge which is great when we bring in a film crew because there’s great space for us without getting in the way of other people bringing their pets in.” 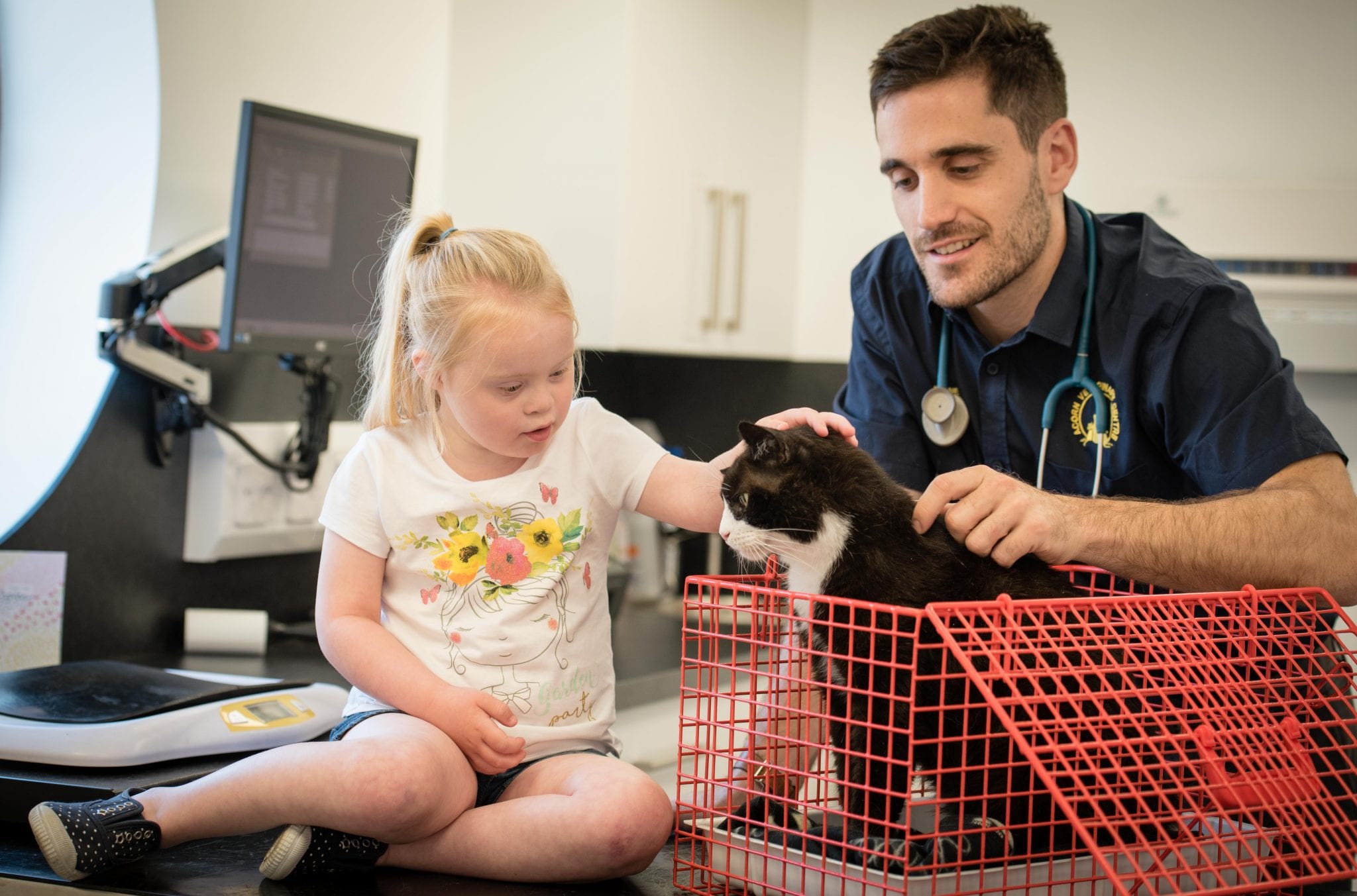 Ferne, who is from Dublin originally and now lives in Bristol, has been a presenter in children’s television for five years. She said: “Dylan has been great. He’s a natural in front of the camera and completely at ease which is not easy for anyone to do.”

Grace’s mum Cheryl explained how five-year-old Frank was particularly dear to her family because he belonged to her late mother Pam who passed away 18 months ago.

Cheryl, an animal nursing assistant, said: ““My Mum took him in as a stray and he’s a very friendly cat who just seems to be very grateful to have a nice warm house to live in!

She added: “It’s been great for us to bring Frank along for the filming and find out he is continuing to recover really well.

“We noticed at the beginning of the year that he just seemed to be looking yellow, he was very jaundice and after some further tests we discovered what was wrong.

“Grace is a very caring child and she loves Frank. She has enjoyed the filming today, talking to Ferne about him and listening to his heart beat with Dylan.”