A vet has issued a warning to dog owners after a Wirral family almost lost their beloved pet to a rare and deadly disease linked to slugs and snails.

Vet Dylan Payne, of Acorn Veterinary Centre in West Kirby, is part of the team helping eight-year-old black Labrador Boo recover from lungworm which is linked to parasites found in common garden slugs and snails. Ingested, the tiny parasites make their way to a dog’s heart and lungs and can prove fatal. 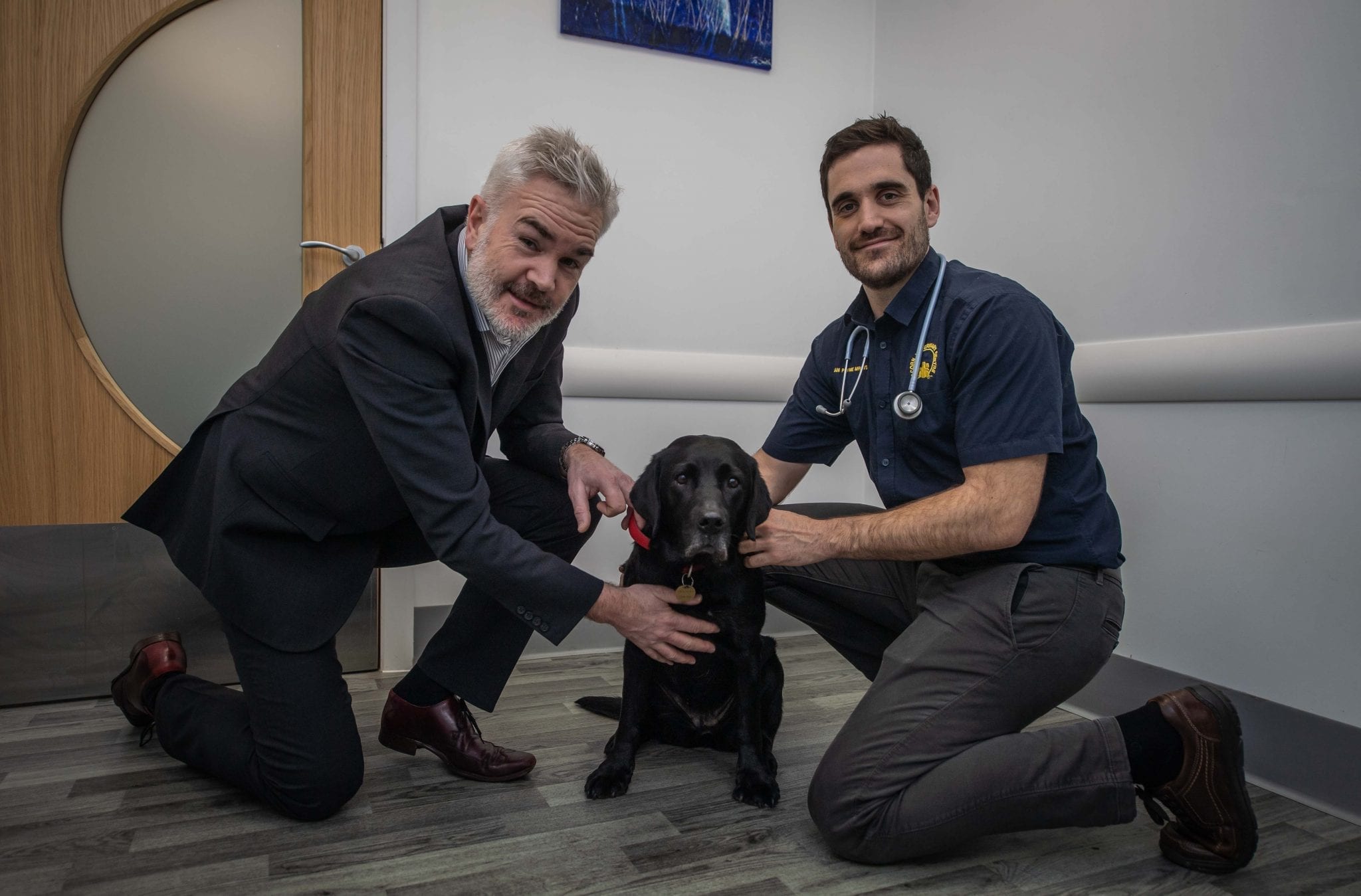 With very few reported cases of lungworm in the north west, Dylan is now urging all dog owners to be aware of the symptoms of the disease and to consider a preventative approach through regular worming.

He said lungworm is usually found in the south of England but it is thought that with weather becoming warmer in the north, more incidents of lungworm have been found.

He added: “Lungworm is not very common and only affects dogs and not people, but as the climate gets warmer, we do expect to see more cases.

“Typical symptoms of the infection in dogs include coughing, loss of appetite, losing weight and becoming generally unwell. Fortunately, lungworm is a preventable disease and prevention really is the best approach.

“The best thing to do is to talk to your vet about methods to protect your dog through regular worming and if you are concerned in anyway about your dog’s health, do get them checked out.”

Boo’s owner, Mike Cockburn, 51, from West Kirby, believes she may have picked the condition up by eating windfall apples which she is known to scavenge while out on a walk.

Mike, who is a senior manager with Wirral Borough Council, said the first he really knew there was a problem was when he took Boo to Acorn Veterinary Centre after she started to rapidly lose weight.

He had been away for the weekend with his wife Lisa and their two children, Kieron, 13, and 11-year-old Sophie, and left Boo and their other Labrador Bessie with his sister.  When he went to collect his two pets, he noticed that Boo was quieter than normal and looked a little slimmer.

“We have had Boo since she was a pup and like all Labradors, she has an insatiable appetite.  But she suddenly couldn’t eat properly which was strange – she was just licking her food and couldn’t seem to chew or crunch anything hard. We changed her food to chicken and rice, and whereas she would normally wolf this down, it took her two or three goes to eat it.”

More symptoms then started to emerge – Boo was losing weight quite rapidly, she was drinking a lot of water and was lethargic out on her walks.

But it was when Boo stopped bringing them soft toys from their daughter’s bedroom as a ‘gift’ – something she would do each morning – that the Cockburns knew something was really wrong.

The team at Acorn organised for her to have a full scan and noticed what they thought was a spot on her lung and referred her to specialists at Leahurst Veterinary Hospital for more tests.

Mike said: “We could see our lovely, bright dog was getting sicker and more withdrawn and it was really upsetting to see.”

At first, it was suspected she had thoracic cancer but further tests detected the spot on her lung again and lungworm 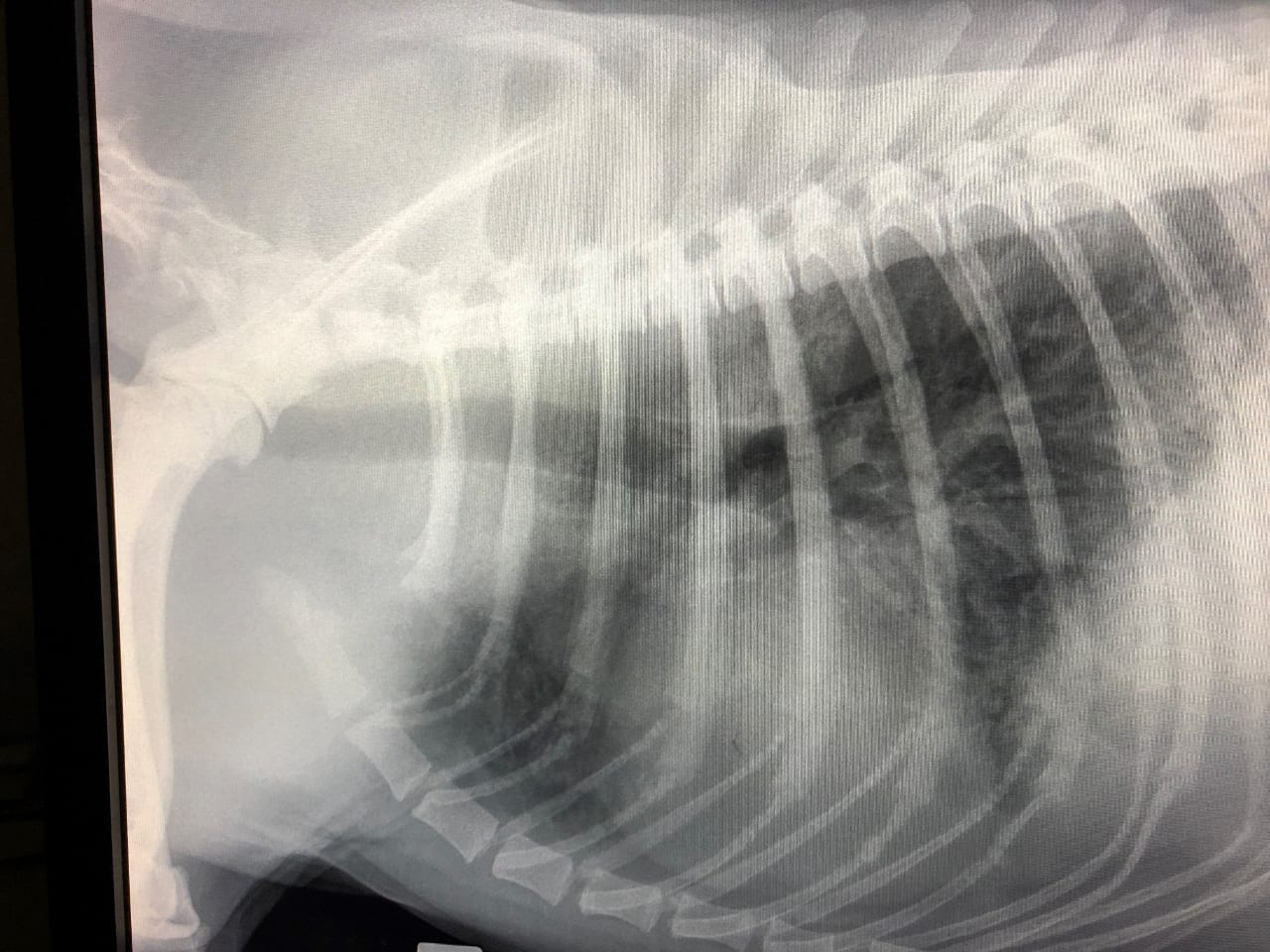 Mike said: “It was such a relief to hear it wasn’t cancer but then we were told Boo was still in a serious situation with the lungworm, so it was all a bit of a rollercoaster.”

Boo was immediately put on a two-week course of strong wormer and to the relief of Mike and his family, was allowed home to recover under the care of the Acorn vet team.

Mike said: “Within a few days Boo started to eat properly and get back her strength. Over the last six weeks she has pretty much put most of her weight back on and is almost back to her old, playful self. She can still get a little stiff after a walk and has regular check-ups at the Acorn surgery, but she is definitely on the mend.”

Mike believes that if it hadn’t been for the determination of the veterinary teams at Acorn and Leahurst to uncover the cause of Boo’s puzzling symptoms, the outcome could have been very different.

“I had no idea what lungworm was and didn’t realise just how rare it is – or how broad the symptoms are. It was real detective work by the vet team who didn’t give up and we have Boo still with us today because of that.”

Vet Dylan said that Boo’s prognosis was now looking good. “In Boo’s case, we were relieved to have caught it in time and she will make a full recovery.”

Mike’s own experience with the disease means he is keen to urge other dog owners to get their pet checked if they are at all concerned about any changes in their dog’s health or behaviour.

“We still don’t know where Boo may have picked up the lungworm infection; we walk in lots of places on the Wirral and had also recently been walking in the South Lakes so it could have been anywhere.”

Having seen the impact of lungworm first-hand, Mike is now urging other dog owners to check their pet’s worming programme.

“It is so important to stay up-to-date with your dog’s regular worming as prevention is better than trying to cure. We were worming Boo regularly but I would definitely urge dog owners to speak to their vets about all the worming options which are available to guard against this awful disease.”

Covid has had a huge impact on our sector which means that we have fewer appointment times and fewer vets to look after an increased demand for our services.

Whilst the majority of clients understand the measures we are taking to ensure we can remain open, a small minority are verbally abusing our team members.

This will not be tolerated, and, if we feel your behaviour is unacceptable, we reserve the right to end the telephone conversation or ask you to leave the premises.

Emergency care must take priority but we will, as always, do our best to help

Thank you for your understanding